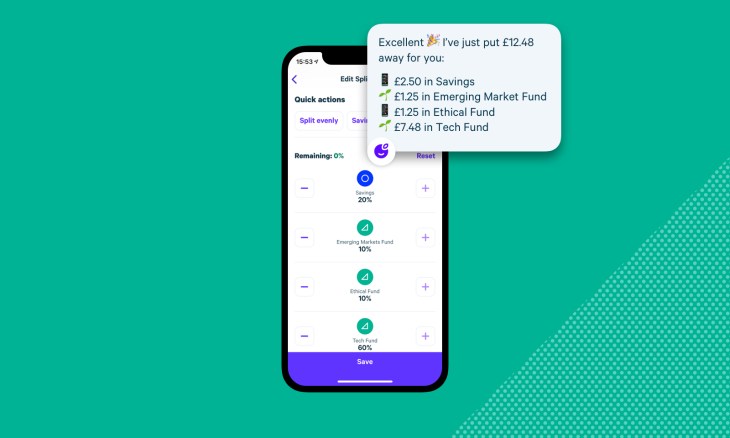 Plum, the chatbot-based app that helps you manage your money, is disclosing $4.5 million in further funding.

The round, which quietly closed in the summer, was led by venture firm VentureFriends  and the European Bank for Reconstruction and Development (EBRD). It brings total funding for the London and Athens-based fintech to $6.3 million.

Similar to U.K. competitors Cleo and Chip and a host of other PFM-styled apps, you link the app to your bank accounts and gain access to a range of functionality spanning savings, investments and finding ways of saving money based on analysis of your regular outgoings.

This includes helping you save based on what Plum’s  algorithms deem you can afford — in the form of round-ups and/or regular savings — and other budgeting tools.

You can also open an ISA investment account and invest based on themes, such as only in “ethical companies” or technology.

Launched last month, a related feature dubbed “Splitter” lets you split your automatic savings between Plum savings and investments, selecting the percentage amounts to go into each pot from 0-100 percent.

Lastly, if Plum spots you are overpaying on various household bills it will offer to help you switch suppliers.

Meanwhile, the fintech startup is making its chatbot available beyond Facebook Messenger with the launch of Plum for iOS. A version for Android is said to be available “in the coming months.”